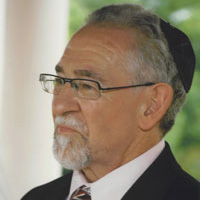 Having come to faith in the God of Israel in the winter 1975, Rabbi Lowinger holds an ordination with the International Alliance of Messianic Jewish Congregations and Synagogues (IAMCS). He resides in Buffalo, New York with his wife, Margaret. Together, they are the proud parents of three children who have blessed them with four grand children and two wonderful in-laws.

Rabbi Lowinger was reared in a Conservative Jewish home, the eldest son of a Holocaust survivor. He graduated from Canisius College in Buffalo, NY with a degree in accounting and marketing. He went on to earn a degree in Ministerial Studies from Berean College in Springfield, Missouri, and has done course work in the Jewish studies program of the State University of New York at Buffalo.

Rabbi Lowinger has been a regular speaker at the annual conference of the Messianic Jewish Alliance of America (MJAA), held each July in Harrisburg, PA. On the international scene, he has taught at the Messianic Jewish Bible Institutes both in Budapest, Hungary and Odessa, Ukraine as well as having had opportunities to teach amongst congregations in Israel, Germany, Poland, Ukraine and Canada. Locally, Rabbi has hosted the TV show “Messianic Judaism Today” and has appeared frequently on “Ask the Pastor” and “The Answer.”

Currently, Rabbi Lowinger is the shepherd of Congregation Brith Hadoshah Messianic Synagogue, a position he has held since 1983. He serves on the Executive Committee of the Messianic Jewish Alliance of America and is a past President. In addition, Rabbi has served many years on the Steering Committee of the IAMCS and is now the ordaining body’s Chairman. Rabbi Lowinger is a Board Member and Officer for the Resource Center for Jewish Ministry in Cincinnati, Ohio, and serves as President of the Messianic Times newspaper.